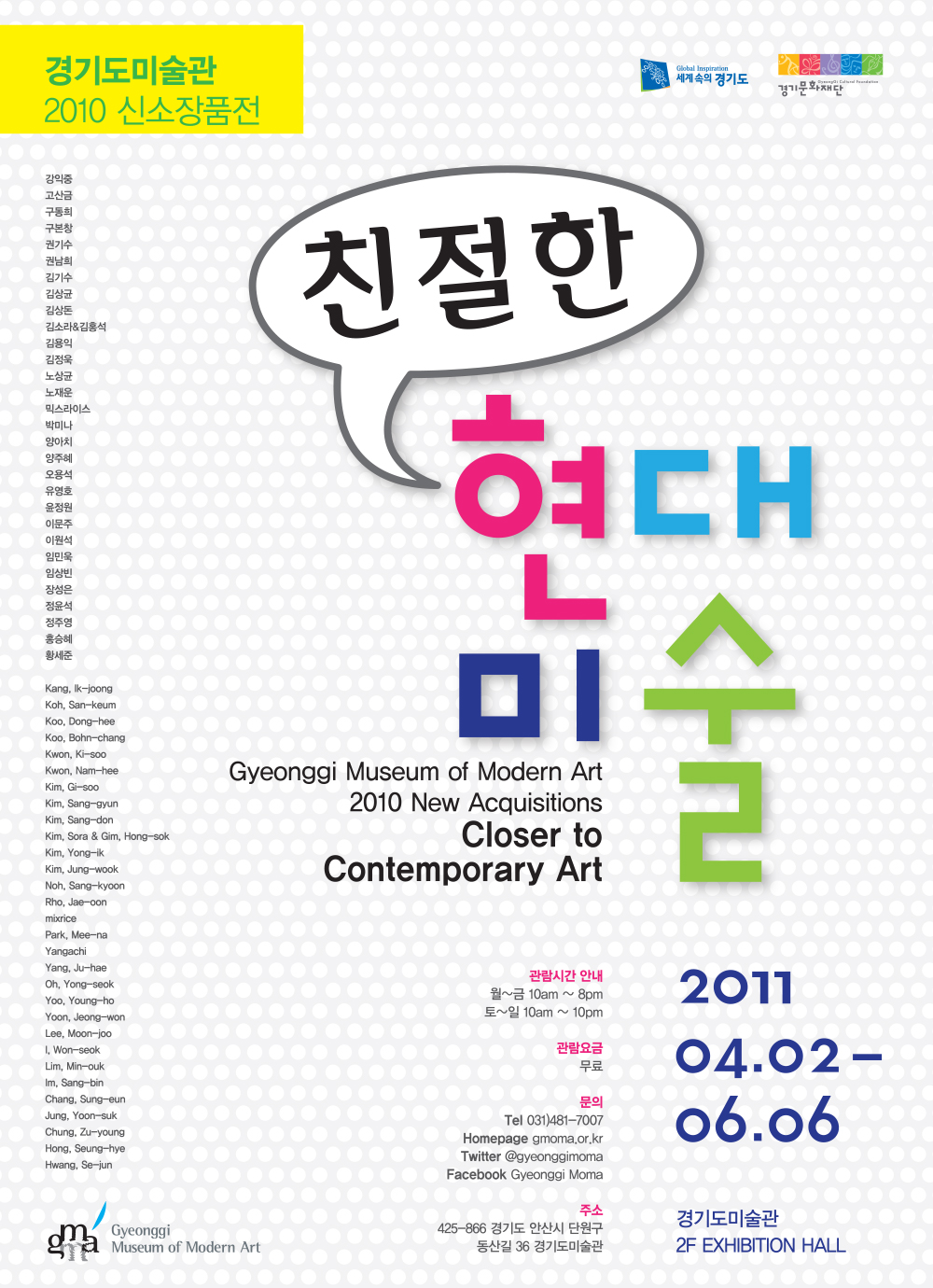 The 2010 New Acquisitions exhibition for Gyeonggi Museum of Modern Art, presented under the title, “Closer to Contemporary Art”, features 30 Works Collected throughout the last year. The works collected during 2010 reflect the guiding principle of the Gyeonggi Museum of Modern Art, which seeks to represent Korean artworks of historic significance, and Works made since 1990 that reflect new paradigms and visions of the future of Korean contemporary art. At the same time, invaluable efforts were made to collect works that were considered friendly to the public, and these works will be presented in the museum’s outdoor spaces.

With a focus on developing contemporary art through the Collection and exhibition of artworks, the Gyeonggi Museum of Modern Art seeks to be a museum that creates links to your everyday lives, through a balance between our professional expertise and friendliness to the public. However we admit that, until now, We have been more concerned with collecting and presenting artworks than with making sincere efforts to communicate with the public. We hope that this exhibition, “Gyeonggi Museum of Modern Art 2010 New Acquisitions: Closer to Contemporary Art” will provide us with an opportunity to be reborn as a highly respected art in stitution which genuinely Contributes towards developing everyone’s right to appreciate culture.

“Closer to Contemporary Art” will help give you an overview of the different paths contemporary art has taken from its traditional roots. This will be shown through four categories that we have identified, including from representation to expression; from reproduction to selection; from completion to process; and from permanence to the momentary.

As an exhibition that encompasses every one of the museum’s presentation spaces, including the exhibition hall, the lobby and our outdoor spaces, and which runs from April 2 to June 6, 2011, We hope that “Gyeonggi Museum of Modern Art 2010 New Acquisitions: Closer to Contemporary Art” presents a cross-section of contemporary art that helps provide a deeper understanding of art’s key ideas, as Well as encompassing a variety of the directions and tendencies within the Korean art scene.
Comments [0]
Leave a comment
You must be logged in to post a comment.