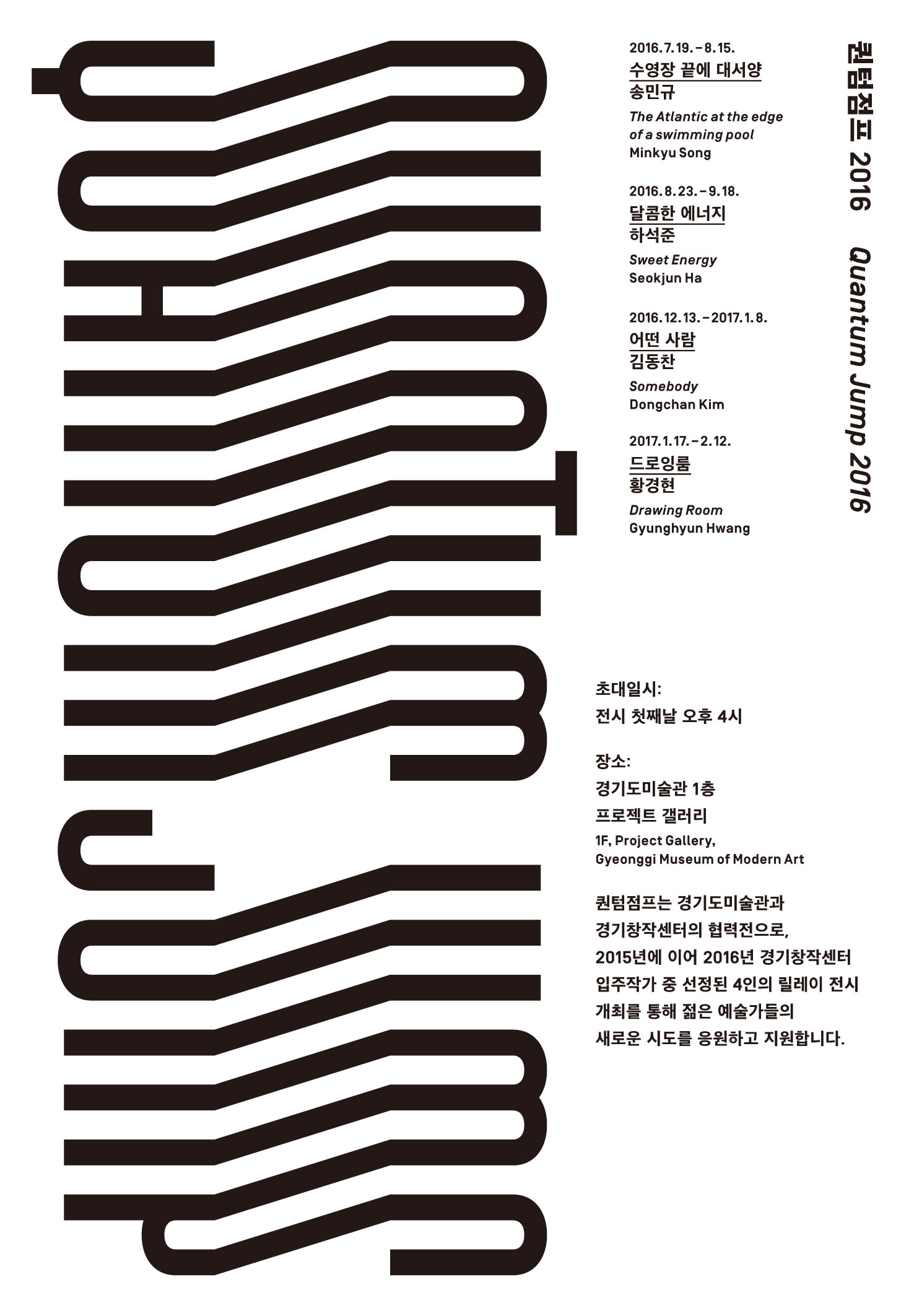 Quantum Jump 2016: SONG Minkyu- The Atlantic at the Edge of a Swimming Pool
SONG Minkyu

The Gyeonggi Creation Center and the Gyeonggi Museum of Modern Art present the relay exhibition Quantum Jump 2016: SONG Minkyu that will be held from July 19 through August 15, 2016. Quantum Jump is a series of exhibitions through which four resident artists are chosen to have their works displayed consecutively. Since 2015 this exhibition has been taking place at the GMoMA Project Gallery. The exhibition of the first artist, SONG Minkyu, is titled The Atlantic at the Edge of a Swimming Pool. It features the new works he produced at the Gyeonggi Creation Center and includes 120 drawings and installations.

Appropriating graphic images and special effects from sci-fi films, SONG has represented the specific facets of contemporary society that he himself has experienced as an individual such as fetishes, signs, and urban development in drawings, paintings, and installation works. Since his childhood he has been a sci-fi film and novel buff, something which influenced him to create a symbolization of quotidian images and a pictorial reinterpretation of the special images found in sci-fi films. The exhibition The Atlantic at the Edge of a Swimming Pool will display an experiment with relational actions between language and image as well as the signifier and the signified based on the events he personally experienced while traveling around Thailand. His swimming practice in a swimming pool evocative of the Atlantic bears a resemblance to something a main character in a sci-fi film would do. His exercise is also in line with his work process in which he completes a solid surface laden with painterly rules through consistent modifications and iterations. Another one of his three-dimensional drawing installations demonstrates a spatial incarnation of his work in which a flat surface with several layers is formed through an arrangement of a combination of snippets of information pertaining to images he acquired throughout his life.

This exhibit program is intended to provide up-and-coming artists who will lead the future of contemporary art with a platform for their activities while offering diverse content to viewers. With “quantum jump” (a physics term referring to the act of jumping from one energy level to another) as its title, each resident artist’s freestanding work is expected to come together to create explosive energy.
Comments [0]
Leave a comment
You must be logged in to post a comment.